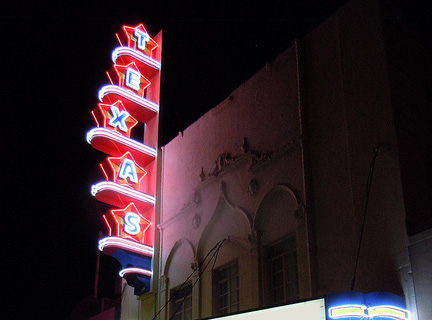 DALLAS: In 2005 when public relations professional Cari Weinberg got a call to help get the word out about an artsy, one-night fundraiser being held in an old, unused theater in Dallas, she was psyched!

“We were excited, but in some ways, we didn’t know what we were doing,” Weinberg says with a chuckle. “We were buying materials and putting them on our own credit cards!”

The idea – Art Conspiracy – crafted by Sarah Jane Semrad and Jason Roberts, was to bring artists, musicians and art patrons together to raise money for some of the children displaced by Hurricane Katrina.

“I was the money runner that night,” Weinberg recalls. “At first I realized that we were actually going to be able to pay ourselves back. But then I could see that there was a huge line of people forming outside the door! It looked like the final scene in the movie Field of Dreams. People just kept coming and coming!”

Weinberg, still a huge fan of Art Conspiracy, was one of the original volunteers who passionately served, including taking on the role of executive director and board president, until 2013.

The first Art Conspiracy event raised more than $10,000 and over 800 people joined in. The gathering was held at the historic Texas Theater in Oak Cliff, where Lee Harvey Oswald was arrested shortly after President John F. Kennedy was shot. The name Art Conspiracy is meant to show that a conspiracy can also have a positive side.

The non-profit’s second fund-raiser was held in the Longhorn Ballroom near downtown, once owned by Jack Ruby – who murdered Oswald days after the Kennedy assassination.

And so, for ten years, Art Conspiracy has been bringing artists and musicians together to “conspire” for the benefit of Dallas’ local arts community with two fundraisers: SEED and Art Con. These are art events that give attendees the opportunity to buy original artwork at reasonable prices and fundraisers that supports local nonprofit arts programs.

SEED, Art Conspiracy’s smaller summer event, is given an annual theme and raises the “seed money” for the costs of the larger fall event. The year’s beneficiary is also named at this gathering. Then, in November, Art Con invites 150 artists to a warehouse-turned-art studio where they create unique works of art on Art Con’s signature 18 x 18 inch plywood boards. The art is auctioned off live. Local music acts perform and it’s an exciting evening with food, drink and fun.

From the inside out

“Art Conspiracy was supposed to be a one time event,” says Art Conspiracy’s Executive Director, Erica Felicella. A photographer and performance artist, she’s worn all the Art Con hats including volunteer and contributing artist, since the very first event in 2005.

“In the early years, we gathered on front porches and wrote on legal pads, to plan things, Felicella says. “Now we have a year round volunteer staff of 35. And, we have our board.”

Originally, it was first come first serve for the artists whose work would be auctioned off. But in no time she says, they were signing up so fast the majority of the art world wasn’t even out of bed yet.

Now it’s an open call lottery. For 24 hours any artist from anywhere can sign up online. Then at the end of the 24 hours and with the click of a button, 150 artists are randomly selected from that list. “Technology has changed us a lot,” she admits. 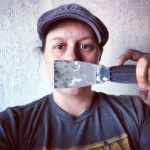 There are many varieties of art created for the events: sculpture, painting, screen-printing, and metal works are just some. All the art is made in the same building on the same day. “It’s very beautiful to see that many artist work together. That experience is sacred to us.”

Felicella says Art Conspiracy has turned in to a beautifully organic community and this is how it works:

“If rule 1 does not work 2 and 3 don’t matter. Rule number 1 is fun and if it does not apply, we have to go back to the drawing board. Then comes believing in what we are doing and being passionate about supporting the arts community.”

But the Art Conspiracy team does much more than produce SEED and Art Con.

“Our team of volunteers goes to every body else’s events. When the musicians who play at Art Con have shows, we all go to all their shows and we go to dinners together. The team is so much more than worker bees – we are our own community.”

And while many think Art Con is a grant, and there is a money aspect, the partnership with the selected beneficiary is much more that.

Last fall’s Art Con beneficiary was the Anita N. Martinez Ballet Folklorico (ANMBF). In addition to the non-profit receiving a check for $25,000, Art Conspiracy came to their aid when they needed help with the technical side of their 40th anniversary show, ANITA!

“Art Con has become a huge advocate for us,” says ANMBF Executive Director, Lisa Mesa-Rogers. “Clayton Smith and Erica Felicella met with me and my team to help us streamline the process and offered stage consulting that would have cost thousands of dollars. When they say they are street level philanthropists, they are!”

Each year Art Conspiracy invites non-profits who qualify to apply to be Art Con’s beneficiary. After the application deadline, a committee goes on site visits and does interviews. From there the board makes the final selection.

“It’s very cool to be able to sit down with an organization and get to know them,” Felicella says. “If they are not selected, we encourage all of them to come back and reapply.”

When it comes to deciding where to hold SEED and Art Con, the team does it’s best to use under-utilized areas. Another of Art Con’s goals is to shine a light on areas in Dallas that have gone dark and breathe new life into it.

“We were at the Texas Theater in 2005 when there was no one there,” she says. “Now there are all kinds of activity. We try to push that boundary and get people to go out.”

“Plus, we love buildings where we have to get our elbows in and clean up, but we still leave an edge. We like it that way!”

For Art Con Year 4, the event was held where Trinity Groves is now. “I’m not saying we were a direct cause, but again, we were there prior to the bubble before Mar (The Margaret Hunt Hill Bridge) existed.

“We also believe in accessibility. We’ve never raised our $10 ticket price and don’t intend to because whether you’re 12 or 80, everyone should be able to come.” 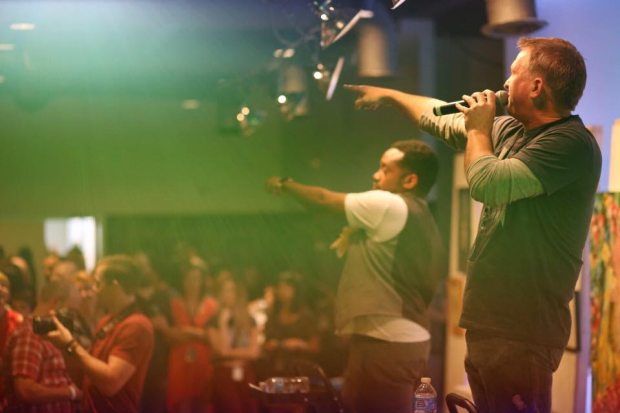 This year’s summer seed event was named SKEWED and was held at Life in Deep Ellum on June 6. Nearly 700 participants came to support the fund-raiser.

“We take the theme and stretch it across everything. We don’t try to pigeonhole the artists’ creativity.” For artists, one word brings many interpretations of ideas. The music is curated to fit the concept and the theme of the evening as well. It’s exciting.

“The event helps us create a little bit bigger piggy bank for the big one in the fall,” Felicella says.

Both events have a starting bid, no matter who the artist is. Summer is $50. Fall is $20. Where it goes from there is up to the crowd.

“Our patrons have been coming for years. One of my favorite things to watch is couples,” she admits. “They get there early, they walk the room, they pick the pieces they want [two sections are auctioned at the same time] they create their game plan, and they talk about their budget. You see it happening all over the room. Then they divide and concur!”

“I have a friend who’s son saves his money every year so he can purchase some art. He loves the auction. There’s nothing cooler that watching a wee tiny young art collector.”

As an artist whose work has been purchased at previous Art Cons, Felicella knows how the artists feel when their work is on display and being sold.

“It’s fun to watch but it is also awkward to watch. We (the artists) are usually on a very quiet wall, in a very quiet space. You see your work being held up above everyone’s heads with flashlights shining on it, people speaking above the microphones, seeing hands flying through the air, it’s also a lot of fun!”

The future is now

Attorney Lacey Lucas currently serves as the president of Art Conspiracy’s board. She joined the board in 2014 but has been a volunteer since Art Con 8. She even volunteered to be a part of Art Con 9 with a separated shoulder and broken ankle. Why? She says it’s all about community.

“Once you experience Art Con from the inside, you can’t shake it off,” confesses Lucas. “The artists, volunteers, patrons, collaborators, beneficiaries, my fellow board members, and, especially – the executive team – are an amazing bunch of people. Their collective talents and enthusiasm are contagious. It gives someone like me, an attorney and not an artist, something to marvel at.”

Lucas is passionate about getting the word out about who Art Conspiracy is and the work that they do.

“I’ve seen people look at us in a variety of ways.  Sometimes, people just don’t get what we do, so they look at us like the illegitimate stepchild.  Some see us as “just an event” because of our beginnings. I love seeing their faces when I explain how we actually operate year-round, and have plenty of opportunities for them to get a fix.”

Lucas also notes that Art Conspiracy, thanks to the tenacity of Felicella, is becoming a bigger conversation in the city of Dallas regarding the arts. “Others are holding space for us at the tables and in the conference rooms where we’ve never been before.”

And she reports that this year the board has approved plans to pilot 8 new programs, 2 of which have already begun.

Says Felicella, “I believe in this city 200%. I believe in what we are doing, our community, what Art Con has to offer, and what direction we are headed in. A large chunk of the people in my life – that I care about – came from the early days. Why wouldn’t you want to stay a part of that?”

There is no doubt that Art Conspiracy’s influence in Dallas is growing. In 2005 they built it and people came. With the continued spirit that this altruistic non-profit is infusing into the city, more is sure to come.