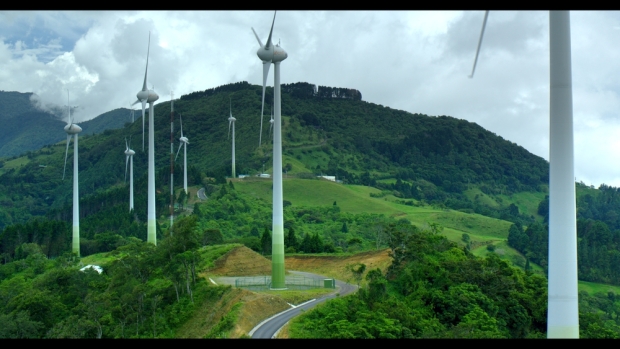 There is a reason, Energizing Our World, a 55-minute documentary on sustainability, was screened on the closing night of Denton’s annual Thin Line Film Festival last month.

Perhaps it’s the way viewers are instantly drawn into the lush landscapes of Costa Rica and California and striking cityscapes of Spain and The Netherlands.

Maybe it’s because the business leaders and educators in the film make a complex concept like sustainability easy to understand.

Could it be the soulful voice of its celebrity narrator, Academy Award nominee, Edward James Olmos?

Or perhaps it’s seeing for ourselves that using renewable energy (solar and wind power), and recycling waste (like sludge from oil refineries being turned into diesel fuel and CO2 being used in place of water to dye fabrics) might keep us from running out of natural resources.

One thing that’s certain: it is under the watchful eye of Executive Producer, Joni Bounds (JNB Holding Company) that both her teams (in front of and behind the camera) have created a film that inspires its viewers to make our planet healthier for ourselves and for future generations.

“Everyone was so passionate about what we were doing,” says Bounds. “Not only is the film insightful, the interviewees are stewards of the earth and great role models for children, students and adults.”

Bounds says that getting Olmos on board, as the film’s narrator almost immediately was the biggest surprise of making the film.

“What surprised me the most was to obtain services with Mr. Olmos within a 48 hour turn around!”

Olmos, who takes one minute showers (to save water) and collects trash on daily walks through the mountain trails near his home in California, was the perfect fit for the film. He certainly set the stage with his gentle father-earth voice, reminding us that our planet is a living thing that we are all responsible for.

“Everybody’s intention when they made this movie was exactly the same – to advance humanity to the highest levels of understanding and to make them become even better people on this planet,” Olmos said in a recent interview with Real-Latino. “The director, Susan Sember, really made it [the film] more human.”

Sember (The Gathering, IMAX/3D Blue Whale Journey), an award-winning documentary film director and producer along with director of Photography Robert Settlemire (Underwater Director of Pirates of the Caribbean and Life of Pi), brought the film to life. Sember is known for shooting documentary films using 4K resolution cameras. The extra resolution adds more detail, depth and color resolution to the film, making watching it more like looking through a window than watching a film.

Energizing Our World takes us on a picturesque journey around the globe. Along the way we meet and listen to “change makers” who explain sustainability as it applies to four areas that we need to survive on the planet: agriculture (food), architecture (shelter), energy and water.

“Energizing Our World is about the truth behind it all, not politics,” says Bounds.

And as one of the energy experts featured in the film would add, bringing solar-powered electricity to off-the-grid homes in India is a “technical solution not a political solution,” some say that it’s just not that simple.

“When we are considering issues surrounding sustainability, it’s rarely the case that a proposed solution is ‘just technical’ in nature,” explains Professor Robert Frodeman, an environmental philosopher at the University of North Texas. “New technologies change things, creating winners and losers–which is what politics is about.”

Frodeman adds that values are imbedded in the world but we don’t see them as values, we see them as facts. For example, some people value money more than the environment.

“The technocrats dream is to find a ‘solution’ to a pressing problem that causes no muss, no fuss. But human values of one kind of another are always involved.”

Putting politics aside, it’s clear that some of the dreamers out there are working hard to create a better world. Energizing Our World makes us feel good about what is being done now and encourages us to become a part of the solution for the future, because one fact is certain: we all share a planet whose natural resources are shrinking.

Earlier this year, Energizing Our World made it’s world premiere at the Santa Barbara International Film Festival. Later this month, the documentary will be presented at the Palm Beach Film Festival and beyond that, Spain’s Canary Islands Film Festival.

Bounds, a native Texan, was very pleased that the film was included in Denton’s Thin Line Film Festival and hopes it will be included in even more festivals around the world. More festivals mean more exposure and a better chance to be picked up for distribution. Conversations with PBS are currently in the works. This means more people will see the film and hopefully get involved. There’s no doubt that it is going to take a critical mass to create the kind of change that is needed to make our planet sustainable.

Click here to view the film’s trailer. You can also visit the film’s website to learn more.